This was posted 10 months 27 days ago, and might be an out-dated deal.

In February, I posted a deal for a tool I had put together to help dispute private parking tickets.

My idea was to build a whole load of self-help consumer tools, but the idea flopped a bit. I had the wrong model (to ask people to pay for the tool) and probably ran it on the wrong platform (a platform called community.lawyer).

This month I've decided to have another go, this time with the idea of making all of the tools free. I've used the open-source software that community.lawyer is based on, docassemble, so the look should be similar. So far, I've got the following tools up:

Over the next few weeks, I'm also aiming to smash out some of the following:

I hope these tools are of use to some cheapies members. Also, I'd be really grateful for any feedback you might have on the existing tools or any suggestions of other tools you'd like to see. 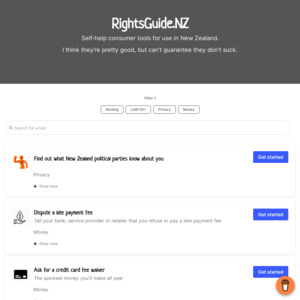 Most voted active or upcoming Other deals from the last 30 days.

New deals from Other category that have just been posted by our users.