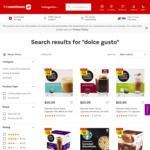 For those of you that buy these pods regularly. I tend to get them from Countdown when they reach $7 a box (plus they have a wider range of flavours).

Choose any 8 flavours and apply the following codes: