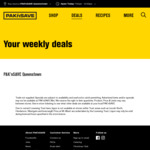 Check your local store website for their promo deals. Most voted active or upcoming Groceries deals from the last 30 days.