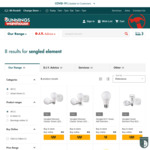 Thanks to richms on Geekzone for this find. Limited stock. The B22(E27) Starter Kit is currently $100 @ Catch AU

According to richms, most if not all of the Sengled range at Bunnings is on clearance.

If you're lucky, might be able to find the following near you:

Sengled Smart Element Plus B22 Wi-Fi Kit And Hub $20

All x4 items listed above are compatible with Google Home and Amazon Alexa. Control your lights through your smart device.

These last three are controlled through Sengled Pulse App.