This was posted 6 months 5 days ago, and might be an out-dated deal.

Develop the skills required and navigate complexities encountered by actual Top Gun pilots in authentic locations, including a carrier deck landing challenge, one of the most demanding operations in the world of military aviation. The Top Gun: Maverick expansion also contains a Maverick Edition livery for the F/A-18E Super Hornet, Super Hornet training missions that will introduce you to radical flight maneuvers, five high-speed, low-level challenges through mountains and canyons, a never-before-unveiled hypersonic aircraft, and a mission to roar into the stratosphere.

This expansion, created in partnership with the Top Gun: Maverick film and Paramount Pictures, will push your piloting abilities to the limits and beyond! 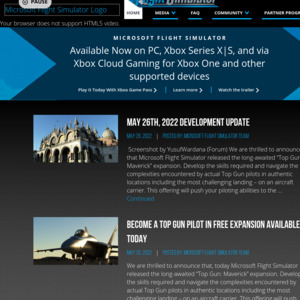