This was posted 5 months 13 days ago, and might be an out-dated deal. 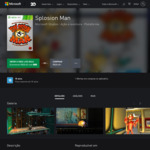 Free if you have Live Gold Membership / Game Pass Ultimate attached to your account.

is a 2.5D action platform video game developed by Twisted Pixel Games for the Xbox 360, available through the Xbox Live Arcade digital download service. It was released on July 22, 2009 as part of the Xbox Live Summer of Arcade.

is a sci-fi action-adventure game that combines an adrenaline-fueled blend of aerial and ground-pounding combat. Set in a parallel universe called "The Void", players take on the role of Will, a pilot dropped into incredible circumstances within the mysterious Void. This unlikely hero soon finds himself swept into a desperate struggle for survival, joining forces with a rebel human group called The Survivors. Trapped in the Void, these resistance fighters are battling to hold off a mysterious alien race that plans to threaten Earth.