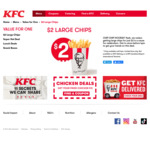 CHIP CHIP HOORAY! Yeah, we reckon getting large chips for just $2 is a cause for celebration. Get in-store before 4pm to get your hands on this deal.