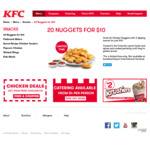 Limited time promotion from KFC, no coupon needed, it's just a regular menu item (including on kiosks) while it lasts. Good deal if you like KFC nuggets, far cheaper than the 6 pack, normally their biggest option which costs about $6. As often the case, airport store is excluded.

After a few days? of billboard advertisement seems KFC finally got around to posting it on their website and Facebook.