This was posted 11 months 5 days ago, and might be an out-dated deal. 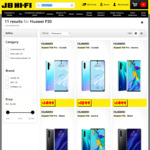 Thursday 8th Aug ONLY!
Instore ONLY!
One offer per customer ONLY!
DON'T MISS OUT!!!