Win up to 25 Bonus Flybuys Daily with the Browse, Match & Win Game @ Flybuys 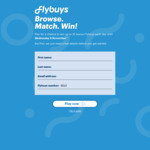 Go to Comp
Mark as SeenMark as EnteredMark as Winner

Description Up to 25 Bonus Flybuys Points Daily
No. of Prizes 1

Play for a chance to win up to 25 bonus Flybuys each day until Wednesday 9 November.*

If you play the Promotion game during the Promotion Period you will automatically be entered into a prize draw (“Draw”), with the chance to win 1 of 20 prizes of 500 bonus Flybuys each (“Second Chance Prize”). You will only receive one entry into the Draw on each day you play.

The Draw will be held by Wednesday 23 November 2022. The winners of the Draw will be randomly selected by Loyalty New Zealand Limited and the first 20 eligible entries drawn will win a Prize. Prizes should be loaded to the winners' accounts within 10 working days of the Draw and will automatically convert from Flybuys into the Reward Currency selected for each Flybuys account at the time of processing.

Prizes are not exchangeable, non-transferable and cannot be redeemed for cash. To be eligible to win a Prize your Flybuys account must be up to date (including a phone number). Flybuys Membership and Reward Currency Terms and Conditions apply and can be viewed at www.flybuys.co.nz.