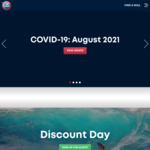 I don't really remember seeing any reason why, but I just filled up on Greville Road and the Gull is 25c cheaper than the Z.

Later drove past a Mobil and it was still 21c up.

There doesn't seem to be any specific promo happening, just cheap fuel which knocked almost 20% off the price of my 70L diesel fill.