This deal was posted 3 months 16 days ago

Check out our Fast Food page for all of the latest fast food deals. 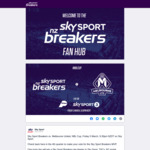 Free Whopper Jr @ Burger King
BALL is the keyword for a FREE Whopper Jr thanks to the Sky Sport Breakers. Visit www.BKWhopper90.com to claim yours!

No other purchase required

As per the last deal….

Free Whopper Junior burger vouchers available each game during the 2021 season if the Breakers score 90 points or more in every game this 2021 season.

Visit BKWhopper90.com and enter the code word to claim your voucher for 1 free Whopper Junior burger. Code word will be shared live on Sky Sport’s game coverage and on Burger King’s Facebook and Instagram pages. The voucher will be text to you, 8,000 vouchers available for download, 1 download per person. Voucher must be redeemed at the front counter or drive thru. Not available on delivery, via the BK App or Kiosk. Coupon Voucher will be valid until midnight (or restaurant closure) the day after the game. Coupons Voucher cannot be used at BK Christchurch Airport. 1 per customer.