This deal was posted 4 months 22 days ago

Check out our Fast Food page for all of the latest fast food deals. 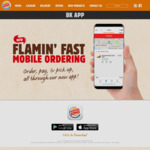 For their latest promotional item, Burger King are doing their typical buy one, get one free app-only coupon. This time it's the Rebel Whopper, which uses a plant-based patty. Note that although the patty itself which comes from v2foods AFAIK contains no animal derived products, it isn't suitable for strict vegetarians let alone vegans as it's cooked on the same grill as their beef patties. https://www.burgerking.co.nz/menu-item/rebel-whopper.

Price was my local store's price. Yours may vary. Coupon single use per Burger King account as they always are for BOGO deals.

To be clear, you need to use the app for this. You also need to either order over the app or at the counter, not as kiosks unless they've changed. And you have to put up with the occasional weirdness of the app. I don't personally have major problems, but others have reported some stores not being able to accept orders. (Their app seemed to break on New Year's eve. But mostly it works for me except for those odd occasions where it refuses to let me check in and I have to move around or keep trying or cancel and remake my order. I have had some other problems in the past, and maybe it still doesn't work after midnight.)