This was posted 7 months 20 days ago, and might be an out-dated deal. 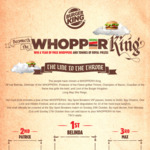 By royal decree, from Monday 21st until Sunday 27th October thou can add bacon to your WHOPPER® for free. T&Cs apply.
https://whopperking.co.nz/

Customers must mention the offer when ordering to redeem the free product. Not available through delivery, mobile app, or kiosk.