Win an American Eagle eMTB Plus a Trip to The Czech Republic, 1 of 50 Cycling Jersey/Shorts Kits or 1 of 100 Tees from BAFANG 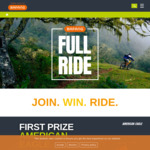 Go to Competition
Mark as SeenMark as EnteredMark as winner

Tell us in 25 words or less how BAFANG would power your life?

Entries will be judged in accordance with the following criteria:

How well each entry of 25 words or less identifies with the BAFANG brand message and mission.
Creativity
Originality and individuality

The Prize does not include travel/transportation, food, beverages, souvenirs, gratuities, car parking charges, additional excursions and attractions or any other costs of a personal nature (including spending money) that are not explicitly set out in the T&Cs.

The Promoter shall take all efforts to ensure the shipping cost is covered so that the winners may receive their prize at the address of their choice, however the promoter cannot be held responsible for unexpected charges and taxes. Prizes will be shipped within 6 working weeks of receiving the winners’ delivery address.

via Katie2014 on OzBargain 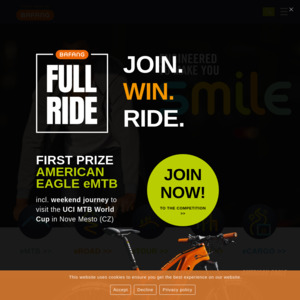